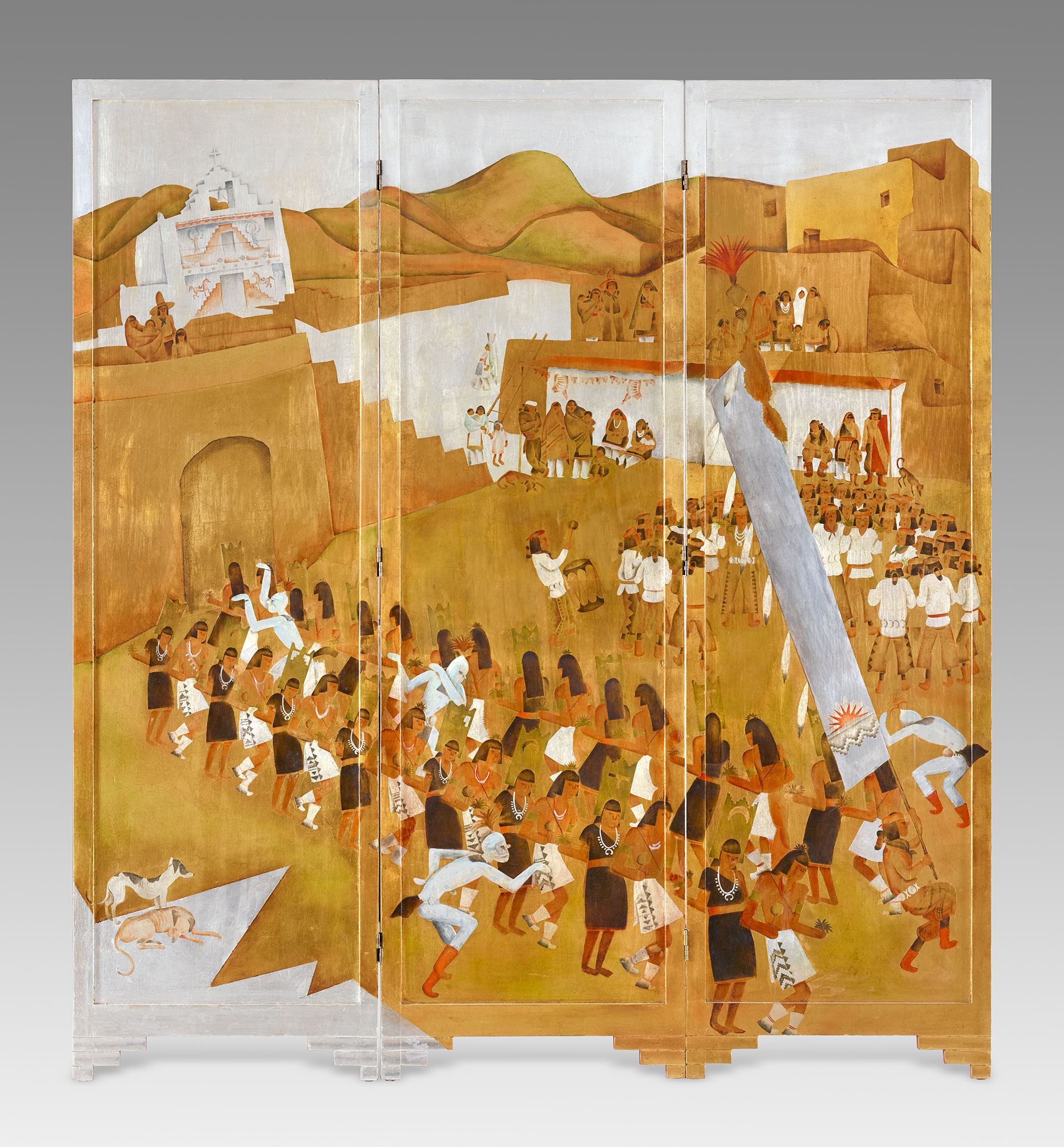 In 1929, sisters Helen, Esther, and Margaret Bruton traveled to New Mexico, drawn to the Southwest like many Anglo-American artists of their period. Prominent figures such as Ernest Blumenschein, John Sloan, and Robert Henri first came to the region at the beginning of the 20th century to produce artworks inspired by the dramatic, colorful landscape and the Native people of the region, who they perceived to be connected to a mythologized, "authentic" American past. Many followed, either building homes in Taos and Santa Fe or simply visiting for short periods of time and briefly joining the artistic communities that flourished in both towns.

It was after one such visit to New Mexico that Esther, the middle Bruton sister, produced two painted screens—Corn Dance, pictured here, and Rabbit Hunt. The three panels of Corn Dance illustrate members of the Taos Pueblo community performing a ritual dance as onlookers, also Pueblo Indians, observe. Executed in gold and silver leaf, the screen is a stylistic hybrid, recalling both regional art and the glamour of 1920s design. Even its stepped feet do double-duty, borrowing both from the telescoping patterns of Art Deco and the geometric rooflines of the church and adobe dwellings that dot the scene.

The screen's perspective, focused primarily on the performers with only other Native people as spectators, implies a certain intimacy, as if the viewer has special access to a private religious ceremony. This was a common approach in paintings of Native communities by white artists of the time; the goal was to convey a people untouched by modernity, the closest thing to ancient myth that the young United States could claim. In reality, many Southwestern Native communities hosted and performed for white tourists in droves, often as part of the Fred Harvey Company's "Indian Detours"—short car trips offered by the organizations to passengers on the Santa Fe Railroad, giving them the chance to experience the "Indian lifestyle" in person. Enormously popular, the detours brought Anglo tourists to Native American communities by the hundreds and were both a necessary economic driver and a source of some mockery in the region, so much so that artist and longtime New Mexico resident John Sloan lampooned their visits in the print Indian Detour.

Esther Bruton's artistic output was deep and broad—along with these screens, she was a painter, printmaker, and muralist. She and her sisters often worked together on projects, including The Peacemakers mural at the 1939 San Francisco Golden Gate International Exposition, an enormous work of art spanning 144 feet by 57 feet. On her own, Esther is perhaps best known for the colorful murals made in 1933 that decorate the Cirque Room at San Francisco's Fairmont Hotel. Both luxurious and whimsical, the painted circus scenes feature some of the same gold and silver leaf technique that she perfected when making Corn Dance and Rabbit Hunt just a few years earlier.

For more on the Bruton sisters, check out scholar Wendy Van Wyck Good's long-running and thoroughly researched blog that covers their remarkable careers.