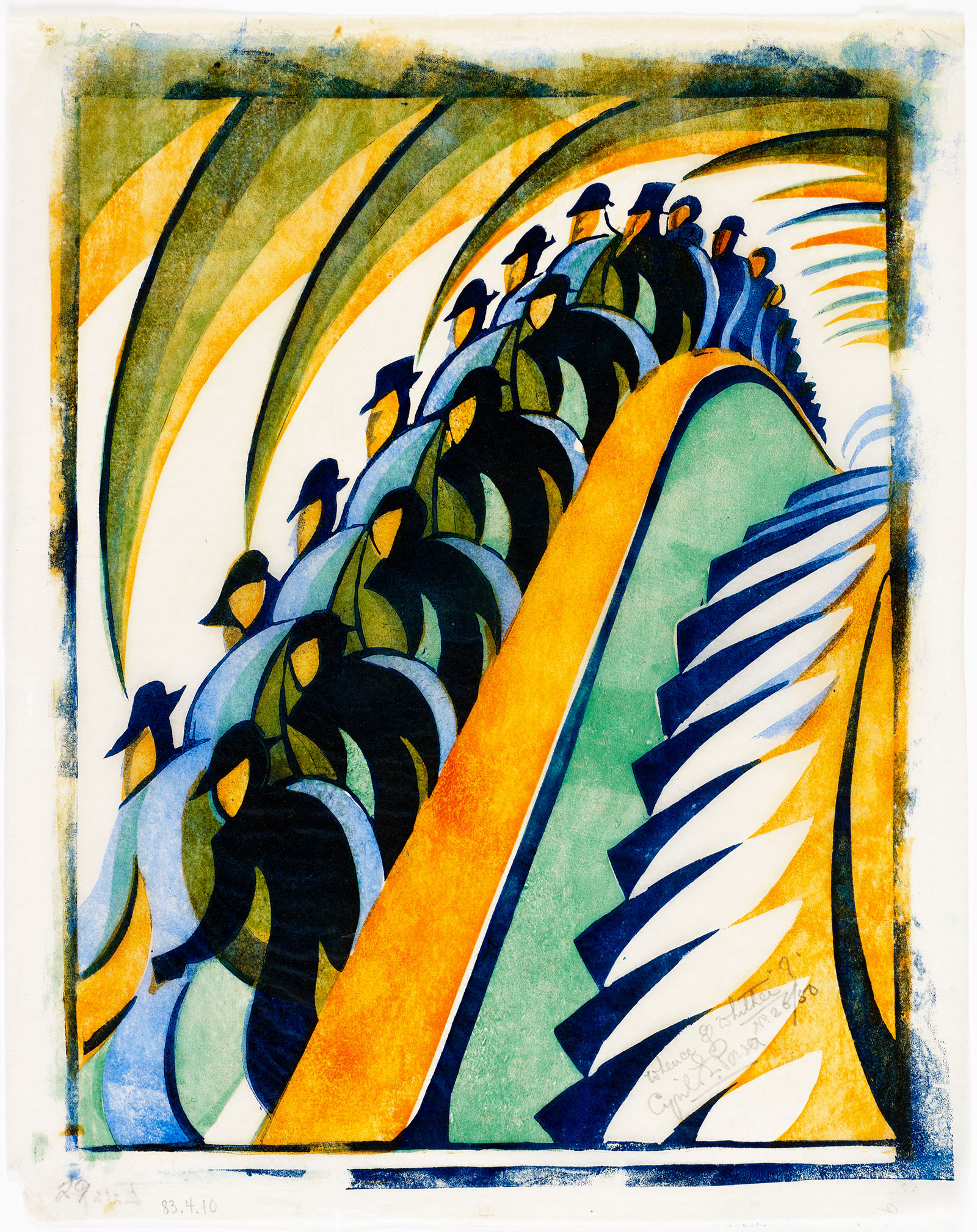 The first escalators in the London Underground were installed at the Earl's Court station in 1911. Though these were not London's first moving staircases (that honor goes to those added to Harrods department store, 1898), anxiety around them persisted—so much so that station operators invited a disabled army veteran to take the first ride in an effort to dispel safety concerns. Approximately 20 years later, however, the escalator—like the elevator, automobile, and the train itself—was fully embedded in the urban landscape of London as a key component of the machinery of city life. It quickly became the primary mode of travel between the deep tube stations that dotted the London Underground system and the street, carrying travelers higher than they might comfortably walk and with far greater capacity than mechanical lifts.

Artist Cyril Power likely used those escalators daily as he lectured at Grosvenor School of Art, which he helped to found in 1925. Power taught courses on architecture and art history while enrolled as a student in co-founder Claude Flight's popular courses on the linocut, a medium embraced by a generation of British artists as an artistic outlet for expressing the conditions of modern life. While many of Power's Grosvenor-trained peers produced largely positive depictions of modernity—using the printing technique to celebrate the vitality and urgency of London after the First World War—Power also understood how easily the vibrancy of the modern city could turn dark.

Many of Power's prints of the London tube system explore the double-edged sword of an expanded urban network—the joy of speed and access butting up against the claustrophobia of the Underground. Perhaps none captures that ambivalence better than the early 1930s work Whence & Whither?, featuring a march of anonymous commuters descending an escalator into the station. Faceless and indistinguishable from each other, they wear identical clothes on their identical trips to what one imagines are identical jobs and lives. Power made preparatory drawings for the print, many of which he captioned "THE ROBOTTOMLESS PIT, HOMO MECHANIENS." If the figures riding the escalator down into the station are not fully machines, they are also not fully men—they have been standardized and mechanized by their daily journeys through the Underground.

It makes sense that Power swapped the funny but bleak "robottomless pit" for the more whimsical title Whence & Whither?. The print employs bright colors and curved lines to suggest dynamism and lightness—uplifting qualities that enliven the print and counter the monotony of the commuters. Power's mixed view of the escalator (and by extension, the new tempo of London life) is also offset by his studio partner Sybil Andrews's take on workers in transit. In Rush Hour, Andrews focuses on the moment that commuters step off the moving staircase. Her fluid print captures the burst of physical movement that transforms these figures from passive riders to self-propelled walkers, a bounce emphasized by the abstracted and arching lines of the escalator itself. Also important: Andrews includes a skirt-wearing commuter, a reminder that even in the packed confines of an anonymous city there is difference and diversity to be found for those who wish to see it.

For more on the artists of the Grosvenor School and British printmaking between the wars, check out our Curator's Choice program from March 2021.